So, as alluded in my first month’s review, changing the price to 99 cents made a very noticeable change in sales.  You don’t have to be an expert with reading graphs to see what happened: 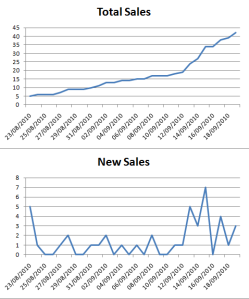 I think you can tell when the price dropped to 99 cents.  Still lots of fluctuations, including no sales at all last Wednesday.  The highest spike also corresponds with the day that Whatley Tupper was featured on Spalding’s Racket.  I’ve heard others say that when they drop to 99 cents that their sales spike and then cool after a few days, and I can certainly attest to that.

In terms of royalties, of course, they slowed, even though I nearly doubled my total sales in a single week: 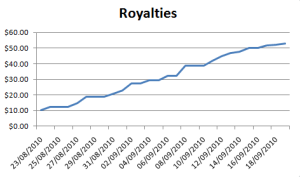 But, of course, anyone who sets their price at 99 cents shouldn’t be thinking about royalties.  (I will be honest about this: I do want to crack the $100 mark sooner than later, because that’s when a non-US citizen breaks the threshold to receive a royalty cheque from Amazon.  It will be the first ever royalty cheque I’d ever had, and I might just want to frame it).  Pricing at 99 cents is about exposure, and I’ll admit that I was taken by surprise with how much of a difference it made.  I’ll definitely try another one-week 99 cent sale again in another month (probably November) to see if something similar happens.

But, for the next few weeks, I want to leave the price alone at $2.99.  I’m curious if I’ll notice any difference in sales compared to the last time it was at this price.  Then, I was averaging about 5 sales a week, but I’ve received a couple of nice blog reviews since then, as well as an Amazon review from J.A. Konrath.  You know that I’ll update you with all the exciting Excel graphs next Sunday.