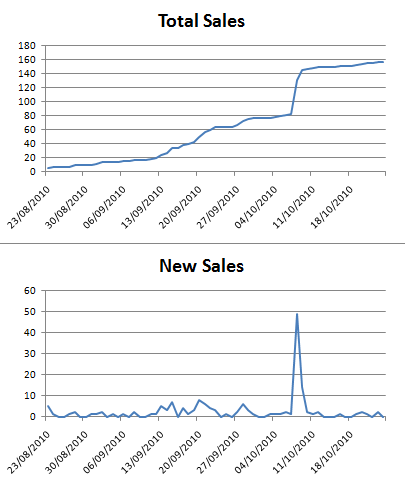 On Wednesday I had an interview go online at mustmutter, although I don’t know what effect that had.  Honestly, I haven’t noticed much of a difference in terms of sales from interviews, although the fact that they become part of the public realm online and can be stumbled on at any time by anyone is useful.  Blog reviews are more useful, and I’m still waiting on a couple more.

I’ve recently been informed that on Wednesday my book will be featured at Daily Cheap Reads, which I’m hoping will lead to a nice boost right before the end of the month.  I’ll put up a post about that on Thursday.

I mentioned in a previous post that I feel that I’m running out of ways to promote “The Adventures of Whatley Tupper,” and after reading a comment from someone on this blog, I’ve decided to release my new book much sooner than I’d originally planned.  I’m not going to detail the sales of “The Year We Finally Solved Everything,” but I’m curious to see what ‘cross-pollinating’ effects having two books out will have, if any.

And next week I’ll post my thoughts on what worked and what didn’t in my second month.

2 thoughts on “Ninth Week in Review”